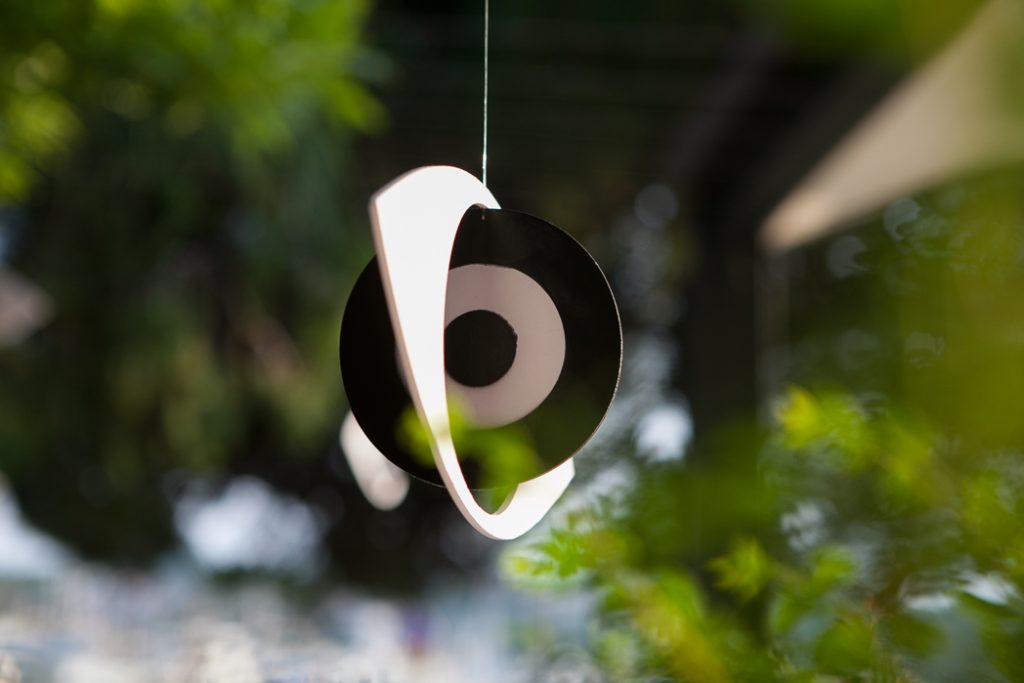 Short Scene is a scriptwriting workshop intended for the development of scripts for short films, which takes place in several instalments under the leadership of first-rate and internationally acknowledged mentors. This time, the several-day intense workshop will take place during FeKK and Kino Otok – Isola Cinema festivals. It involves learning about the theory and practice of scriptwriting, the development and writing of a script for a short film. The emphasis is on working in a group with other participants and on individual work with the mentor.

This year’s mentor of Short Scene is Wim Vanacker, an acknowledged international expert in writing scripts for short films, script advisor, mentor and guest speaker at various workshops, film festivals and short film script development platforms. This year, he became a member of the Selection Committee for the Official Short Film Competition of the Cannes Film Festivaland advisor at First Cut Lab. Vanacker first studied psychology in Belgium and then worked in the field of drug addiction in Dublin. Three years later, he continued his studies at EICAR in Paris, where he made two short films and then joined NISI MASA –European Network of Young Cinema as head of the script development section. He is also the project leader at European Short Pitch, and is currently developing two films as a scriptwriter and director: [ˈsɪə.ri.əl ] and Psycho Revisited.

Meetings of the participants with the mentor.
At Isola Cinema, the workshop participants will deepen the knowledge gained at FeKK in Ljubljana and, via the internet, meet with their mentor Wim Vanacker and, in person, with Viviana Carlet and Carlo Miggoto, the directors of the Italian short film festival Lago Film Fest.

The Slovenian Art Cinema Association (AKMS) brings together venues that promote arthouse films. In the closed session, association members will confer about the possibility of establishing a new VOD platform and the plan for the next quarter. In the first open session, we will talk about experiences with VOD with our guest experts, representatives of the DAFilms.com and Svevid.net platforms and then focus on the presentations of ticket sales systems and systems for registering the audience. In cooperation between Kino Otok–Isola Cinema Film Festival, AKMS and Motovila Institute.

DAFilms.com is an international online distribution platform for documentary and auteur films that focuses on European cinema. It offers more than 2000 films that are available all over the world. It includes various programme selections from presentations of archival historical films and retrospectives of leading filmmakers to new premiere formats. DAFilms.com will be presented by Diana Tabakov (Czech Republic), Executive Director of the DOC Alliance project, which, through the platform, connects the most relevant European film festivals.

Svevid.net is the first subscription VOD platform that gathers the audiovisual heritage of former Yugoslavia and offers numerous fiction, documentary and animated films and TV series that can be viewed on computers, tablets and smart phones. Svevid draws on more than eighty years of regional film heritage and, on the basis of a subscription model, offers a carefully selected catalogue of restored and digitised films and series in high resolution. In 2019, the platform was established by a group of five Croatian AV experts and named after a four-headed Slavic deity deeply rooted in the cultural heritage of the region. The business and creative aspects of the new platform will be presented by the CEO and creative director Filip Lozić and CAO Danijel Popović (Croatia).

A professional seminar at which we will talk with international guests and the Slovenian interested public about innovative models of cooperation between international film festivals, including VOD platforms. In cooperation between Motovila Institute and Kino Otok – Isola Cinema Film Festival, members of the PRO KUS consortium, which advocates more stable conditions for cultural production and the professionalization of the cultural and creative sectors.

Would you like to know more about EU opportunities for international cooperation in culture, cinema and creative sectors? The teams of CED Slovenia (Motovila) and Europe Direct Koper (PiNA) will present their work and the opportunities with which the EU encourages project development and international cooperation. After the event, Motovila’s team will be available for individual counselling.

We will present the DAFilms – DocAlliance online channel, one of the most successful MEDIA supported cases of such cooperation between seven prominent European film festivals (CPH:DOX, doclisboa, Millennium Docs Against Gravity, DOK Leipzig, FIDMarseille, 24. MFDF Ji.hlava / 24th Ji.hlava IDFF and Visions du Réel) intended to promote quality auteur documentary films, also via the DAFilms.com VOD platform. The project’s Executive Director Diana Tabakov (Czech Republic) will be with us. Joining the discussion after the presentation is Doris Bauer (Austria), the director of Vienna Shorts, a festival running for 18 years that is regularly ranked one of the best European short film festivals supported by Creative Europe – MEDIA. Vienna Shorts is also one of the partners in a new network, which applied for a grant in last year’s first Creative Europe call for festival networks. This is a continuation of the current discussion on the exchange and connection between festivals, also in light of the changes to the MEDIA subprogram of Creative Europe, which this year began encouraging the networking of festivals.

The event is part of a cycle of three specialised professional trainings for film and AV professionals in the framework of the series of trainings Beyond the Cultural Model. The training series is organised by the Motovila Institute as part of the activities of the Centre for Creativity Platform Partner Network. The project is co-financed by the EU (the European Regional Development Fund) and the Republic of Slovenia.

The activities of the PRO KUS consortium are co-financed by the Ministry of Public Administration in the framework of the public call for the development and professionalization of NGOs.

Skillshare – How to get a successful film project? 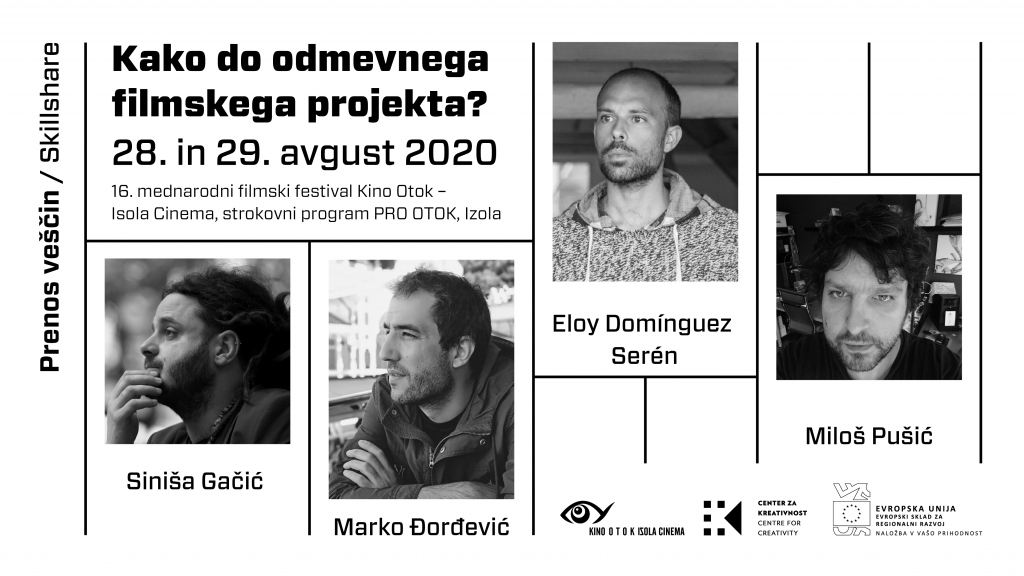 In cooperation with the Centre for Creativity (Museum of Architecture and Design), the Kino Otok – Isola Cinema Film Festival will organise the Skill Transfer event focusing on filmmaking. The training will present the experiences of four established filmmakers from Slovenia and abroad that have managed to realise their film visions into internationally successful projects. The event is intended for filmmakers at the beginning of their career or project that would like to find inspiration for a break-through in the experiences of successful Slovenian and foreign film productions.

The production and distribution of auteur films has rapidly changed in the last decades due to the new requirements of contemporary film projects that are usually made in uncertain conditions. Innovative approaches to the realisation of films and reaching the audience are emerging. The end goal is a successful film project that impresses not only domestic audiences, but also the most relevant international festivals that recognise universal topics in films with local themes

With the guests, we will focus on the following topics:
– managing the production from the idea to its realisation: how to deal with uncertain circumstances and overcome the rejection of traditional funders?
– strategy for film distribution: how to take the reins?
– audience: how to ride on the wave of audience enthusiasm?
– success: what is the recipe for a film’s success or how to understand that it does not exist?

Siniša Gačić, a Slovenian director and journalist, an insightful observer of the fates of individuals and social groups on the margins. His latest documentary Daughter of Camorra (Hči Camorre, 2019) had its world premiere in the competition programme of the Sarajevo film festival, which was followed by a successful distribution path. Together with the film’s scriptwriter Anka Pirš, Gačić followed Cristina Pinta, a former Camorra member, in the South of Italy for four years, which required the filmmakers to adapt to unknown circumstances and employ their all-round resourcefulness. Producer Miloš Pušić and director Marko Đorđević, Serbian filmmakers, creators of My Morning Laughter (Moj jutarnji smeh, 2019), a feature film created with a local team on a minimal budget and with lots of resourcefulness. The film was a big success with the audiences. It premiered at the Rotterdam film festival and obtained a cult status among Serbian students of film directing. The film will be screened at the Kino Otok – Isola Cinema Film Festival.

Director and producer Eloy Domínguez Serén, who comes from Spain and occasionally lives in Sweden, created a film in Western Sahara. Life resourcefulness in combination with professional self-discipline and vision brought him numerous awards and festival selections, among others, the international premiere at the most important festival of documentary cinema in the world IDFA.
His films have been presented at Isola Cinema several times; this year, we will present his latest feature-length documentary Hamada (2018).

The event will be moderated by Dragan von Petrović, a Serbian filmmaker with experiences in working with international film crews, the field of funding films in the region and strategies of film distribution at festivals in Europe and the world.

Free entry. Seats are limited, we accept reservations at pro@isolacinema.org. My Morning Laughter and Hamada will be screened at Art Cinema Odeon in Izola on Thursday, 27 August 2020.

Dragan von Petrovic will moderate a talk with Marko Đorđević, Miloš Pušić and Eloy Domínguez Serén, in which the guests will think about the traps and opportunities of creating film projects in uncertain circumstances.

A work dinner of film professionals with guests of the event.
For PRO accreditation holders and invited guests.

Individual talks with guests of the event.
We accept reservations at pro@isolacinema.org.

The training Skill Transfer – How to Get a Successful Film Project? is organised by Kino Otok – Isola Cinema Film Festival as part of the activities of the Centre for Creativity Platform Partner Network. The project is co-financed by the EU (the European Regional Development Fund) and the Republic of Slovenia.

Luís Azevedo: The art of the video essay

Luís Azevedo is a Portuguese video maker with a master’s degree in film. He’s been regularly making video essays for Fandor, Little White Lies and MUBI, with a total of over 60 pieces to his name. Along with kogonada, he was the recipient of the fake “2017 Chris Marker Legacy Awards” for the most Markeresque video of the year. Through his provocative, experimental work, Azevedo tackles the different aspects of cinematic art.

Luís Azevedo will present his distinctly exploratory and creative approach to video essayism. Some of his essays will also be on view.

In cooperation between the Kino Otok – Isola Cinema Film Festival and FIPRESCI, Slovenia.