PRO OTOK: Skill Transfer – How to Get a High-Profile TV Or Online Series?

This year’s Skills Transfer, intended for the creators of the series, was created in cooperation with the 17th International Film Festival Kino Otok – Isola Cinema and the Center for Creativity at the Museum of Architecture and Design (MAO). It is part of the multi-day festival program for film professionals PRO OTOK (see full program), which will take place between 6 and 8 October 2021 at MAO in Ljubljana. Skill Transfer on 7 and 8 October 2021 brings the experience of six established filmmakers from Slovenia and abroad, who are successfully turning their visions in internationally successful series.

Series development has changed rapidly over the last decade due to new production and financial approaches. Innovative ways of realizing series and expanding the reach of audience through classic television channels or online platforms are being developed. The ultimate goal is a successful series that arouses the enthusiasm not only of domestic viewers, but also of the most relevant international festivals, which are increasingly considering the series as an important part of their programs.

The event is aimed at creators of series; directors and producers at the beginning of their career or project who want to find inspiration for a breakthrough based on the experience of successful Slovenian and foreign series.

Introducing the teams of the series Morning Changes Everything (Jutro bo spremenilo vse), The Lake (Jezero) and V dvoje. With our guests Goran Stanković, Vladimir Tagić, Snežana van Houwelingen, Matevž Luzar, Klemen Dvornik and Luka Marčetič, we will focus on the following topics:
– managing the production from idea to its realization: characteristics of productions of low and high budget series, how to choose co-creators, what are the possibilities of co-productions;
– content providers: specificities of cooperation with traditional television networks and online video-on-demand providers, what do festival rankings contribute in this context;
– audience: how to gain a resonance with the widest audience, how to bring a young audience to the screens;
– success: what is the recipe for the success of the series in modern production requirements and conditions.

Participants will also have the opportunity for one-on-one consultations with the guests of the event, which will be organized online.

The director and co-authors of the series Goran Stanković and Vladimir Tagić and producer Snežana van Houwelingen will present the development of the production of the Serbian series Morning Changes Everything, which in 2018 immediately won over generations of young Serbian people with a subtle sense of the era. It has since then consolidated its reputation as one of the biggest hits in the region – as of this year, it is also available to Slovenian audiences through the VOYO platform. The award-winning series focuses on the lives of four friends, in their thirties, who are trying to strike a balance between young age and adulthood in Belgrade’s everyday life. 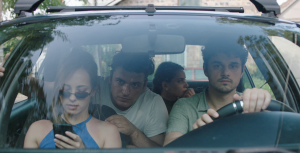 Directors Matevž Luzar and Klemen Dvornik will share their experiences with directing and producing the series The Lake, a detective with a touch of Scandinavian noir genre, which was produced by RTV Slovenia based on the novel by Tadej Golob. Jezero is considered to be the most internationally successful Slovenian series, which is already developing its second season, and this month the duo also received the Slovenian director’s award ‘Štigličev pogled’ for outstanding directing.

Years ago, the versatile author and director Luka Marčetič became famous for his guerrilla interventions in the Slovenian scene of films and series, which, despite modest budgets, broke ratings records. His most successful series with an imaginative intertwining of humor and drama V dvoje, where they collaborated with Klemen Dvornik in production, follows the everyday events of modern youth, who step into the unknown on the threshold of adulthood, through an insight into the lives of two young couples. Since 2015, it has experienced three seasons. 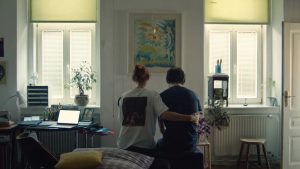 11:00–13:00
Case Studies: The Series Morning Changes Everything, The Lake and V dvoje

The series Morning Changes Everything and V dvoje are available on Voyo.si. Participants of the Skill Transfer with a reservation of a place at the event are given 1 month (30 days) of free subscription!

Free entry. The number of places is limited, reservations at pro@isolacinema.org.

Nadina Štefančič will moderate a conversation with Goran Stanković, Vladimir Tagić, Snežana van Houwelingen, Matevž Luzar, Klemen Dvornik and Luka Marčetič, in which the guests will discuss the possibilities of creating series projects in the region.

Free entry. The number of places is limited, reservations at pro@isolacinema.org.

15:00–17:00
Networking Lunch of Film Professionals With Guests of The Event

One on One – individual web consultations with the guests of the training course Skill Transfer and pitching opportunities with Voyo.si.

The number of places is limited, pre-registration with a brief description of the motivation for the meeting at pro@isolacinema.org.

Free admission to all public events. The number of places is limited, reservations at pro@isolacinema.org. Only visitors who have valid proof of meeting one of the PCT conditions: morbidity, vaccination or a negative test result can attend the events. The use of a protective mask on the scene is mandatory. The organizers also take care of the safe implementation of the PRO OTOK program by taking into account all applicable preventive measures and instructions.